Budapest: Wherever You Go, There You Are

Once the public knows you’re a writer, they bring the characters and events to you. And as long as you maintain your ability to look, and to carefully listen, these stories will continue. – The Grand Budapest Hotel

I’m sitting in a warm cafe tucked into one of Budapest’s laneways. Sounds quaint, doesn’t it? I feel like I don’t have the words to describe the city I have been living in for the past four weeks. I say “living”, because when you have the joy of house sitting an apartment with your own jingling set of keys and plants to water (they’re all dead.. sorry), you really feel like a local. But “living” also insinuates that you walk the city with familiarity; something Budapest has not let me settle into.

Which is a good thing because Budapest’s intrigue lies so firmly in getting lost, exploring, following your nose and letting your curiosity guide your feet forwards. Walking has never been my strong point; I’m a chronic whinger. Ask anyone that has had the joy of walking more than 10 metres with me and they will get a exasperated look on their face.

But in Budapest, when I close the door behind me, I’m worried that I’ll walk all the way to Romania. I turn the corner and spy a slash of street art, I keep going led by a cinnamon scent on the breeze (this is probably how I will die, following cinnamon on the wind like some kind of baked-goods-eating pocahontas), and soon I’ve walked for five hours and body is burning from the shock of exercise. 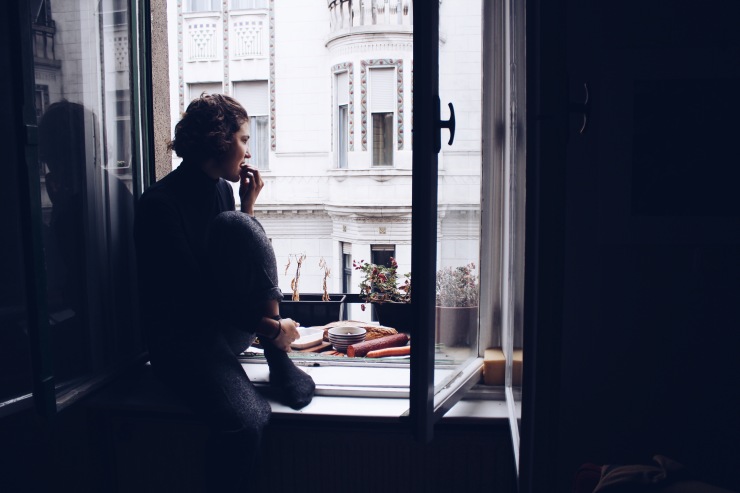 Getting lost in a European city is such a cliche. But you never hear stories of the hapless tourist that gets lost in Paris and ends up getting mugged in the rough inner city. The untold truth is that every city has ugly parts: Industrial areas, low-cost apartment buildings, and the always weird area around the airport. We tend to gloss over those areas in both our memories and our photos, and I’m not going to go all travel writer on you and say something like “but you can find beauty even in the ugly parts” because sometimes ugly parts are just ugly.

But as a whole, Budapest is beautiful. That’s obvious isn’t it? You don’t need me to tell you to come here.

The Market Hall is stuffed full of cheese, and salami, and pickles served by surly ladies in aprons. Tourists gleefully skip around with a camera in one hand and a fistful of cheese scones in the other.

The bridges that criss-cross the river serve as benches to watch the green water of the Danube flow by and the more impressive buildings of the city are pulled out of the darkness with a vibrant yellow glow.

The locals are wonderfully cranky. They have no time for your sh*t and I love them for it. Being fake-nice is not a thing in Hungary probably because between their long, cold winters and their dictator-y political system, they can’t be bothered to smile when handing over your fifth flat white of the day.

And if that’s not enough, flower boxes sit in every window and the autumn leaves decorate every sidewalk. Delightful. 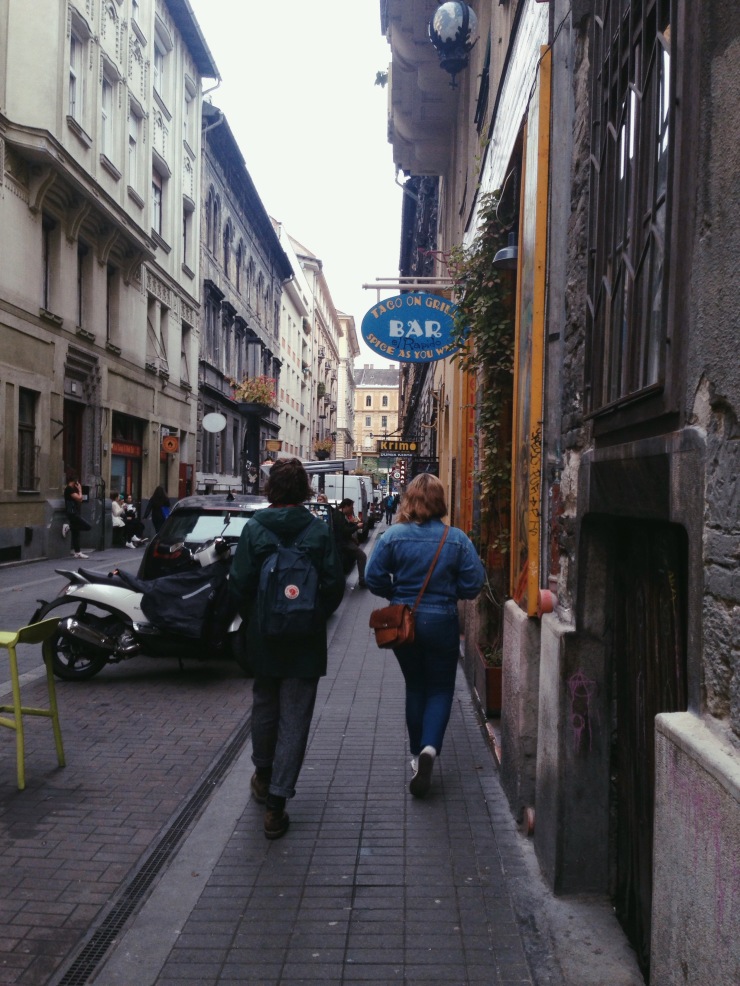 In our first week in Budapest, we were sitting on the edge of the Danube and watching as the sun went down over the Buda hills. In the city, sunset turns the sky orange and then washes the city into a grey-ish mess of twinkling lights. We were struggling to get the cork out of our cheap red wine and some oldies aboard the cruising boat docked in front of us were watching with a vested interest. Would we be able to to pry the cork from the bottle? Or would we give up and dejectedly be forced to stare at the corked bottle while we choked down mouthfuls of bread and cheese? It was gripping stuff.

We eventually yanked the cork free, and the Arosa, (which you just have to pronounce as “the arrrrrrrrrrosa”) prepared to sail off down the Danube. The funny thing was that as the boatmen threw off the mooring ropes, and the oldies gathered on the roof of the boat to watch, a singer on board launched into a passionate performance of “Time to Say Goodbye”. If you’ve ever been to a wedding, or witnessed the birth of a baby, then you know what it’s like to experience someone else having the time of their life. It’s a magical thing. And as the oldies sailed away down the Danube, we sipped our $5 wine as other people made a memory perfectly scored by Andrea Bocceli. And wouldn’t it be great if all of our life moments had such a fitting soundtrack. 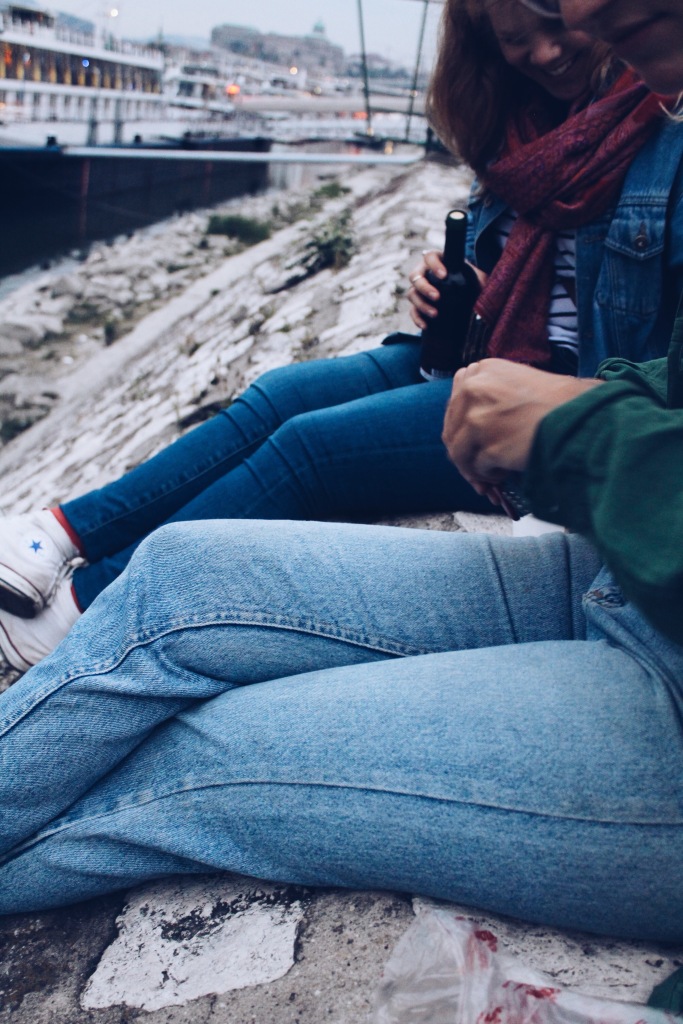 If you’re a Wes Anderson fan, Budapest is the setting to live out your pastel-coloured dreams. From charismatic old men with wrinkles and smiling eyes that say hello instead of goodbye, to opera houses that heave with men and women dressed in fur and bowties. Even the metro trundles along like something out of a history with it’s green vinyl seats and yellow light fixtures. Maybe if I lived here I would start collecting Wes Anderson quirks like hoarding pinned butterflies and staring at the neighbours through a heavy pair of binoculars. I would have to take up smoking so that I would stand on the street corners and chat about the time I spent 42 days in the Hungarian forest living off wild mushrooms and berries (an actual conversation I had).

But in all seriousness, if you’re an aspiring Zissou or Tenenbaum, come to Budapest where Opera tickets are $10, and you can spend your weekends spying saggy tummies and hairy butts in yellow bathhouses.

And speaking of butts, which I tend to do a lot, mine is hurting. Which brings me to an ultimate truth: wherever you are in the world, if a cafe serves an alternative coffee brew, you’re going to be sitting on something uncomfortable- Just pray it isn’t a milk crate.

2 replies on “Budapest: Wherever You Go, There You Are”